VANCOUVER, BC, September 24, 2010 - GoldQuest Mining Corp. ("GoldQuest" or the "Company"), is pleased to present the following corporate update and announce the appointment of its new Chief Financial Officer.

The Company holds exploration permits to 30 concessions in the Dominican Republic. These projects are grouped into the following districts: 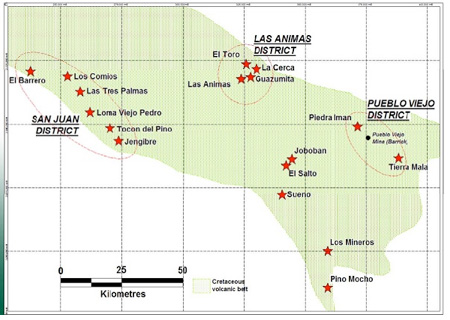 GoldQuest has compiled all of its data from the Las Tres Palmas project and incorporated the findings generated as part of the former Gold Fields joint venture. The primary goal of the program has been to develop sufficient data for the generation of a National Instrument 43-101 - Standards of Disclosure for Mineral Projects ("NI 43-101") report, which report will include specific recommendations for additional drilling intended to further expand on the Company's existing resources. The NI 43-101 report is currently under preparation and will be released upon completion.

Significant results from recently reported drilling are summarized as follows:

Table of length-weighted average grades from the Las Tres Palmas drill program at a cut off of 0.1 g/t Au. 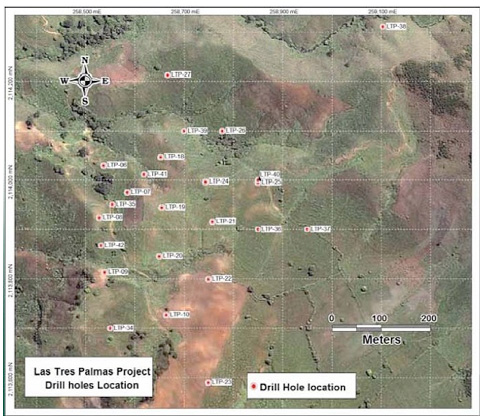 A graphic of the soil sampling program follows: 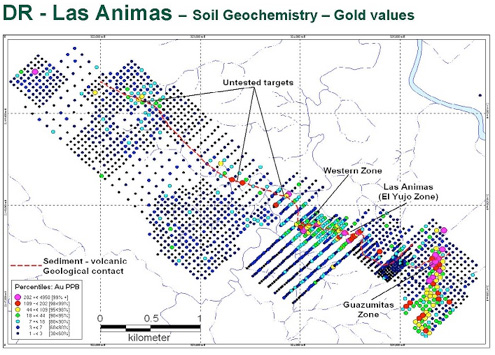 The Jengibre concession is roughly 30 Km's SE of the Las Tres Palmas project and has been previously tested with soil sampling, channel sampling and a drilling program that provided prospective results. Channel samples over 59.5 meters recorded an average grade of 1.58 grams per tonne gold and one drill hole intercepted 54 m grading 1.03 grams per tonne gold.

The Company has recently completed a +600, soil sample program designed to test the above referenced anomalies and to provide data for a planned drilling program to commence shortly after results from the soil sample program are thoroughly analyzed. The assay results are presently being reviewed by Stewart D. Redwood, PhD, FIMMM, Consulting Geologist for the Company.

Iberica holds the exploration permit for the Toral Project, a highly prospective mineralized area in a mining and investment friendly region. The Toral Project has the potential to become a significant long-lived asset. The mineralization is contained within a steeply dipping, sheet-like structure that includes silver and coarse-grained zinc-lead sulphides.

The Toral Project area was originally investigated by Peñarroya-España and associates from 1975 to 1985 and included over 42,000 metres of diamond drilling. These drill holes reportedly delineated a zone of mineralization that is 1100 metres in length by about 3.7 metres wide and over 400 metres high. This block is a continuous, sub-vertical, tabular zone of coarse-grained lead-zinc-silver sulphide mineralization that is still open along strike and down dip.

GoldQuest has commissioned Micon International to perform an NI 43-101 resource calculation using data from the extensive prior work. Due to the availability of both drill core and assay data from the previous Peñarroya-España and Lundin drill programs, the Company believes no confirmation drilling will be required.

The Company has also commissioned a small, confirmation soil sampling program that is currently underway with expected completion by the end of October.

The Toral Project permit was recently renewed for a further three year period.

In addition to the acquisition of the Toral Project and as part of the same transaction, GoldQuest acquired a second polymetallic project also located in northwest Spain. Further details of this second project will be announced after full title has been received from the Spanish authorities.

The Company continues to prioritize, critically review and explore its portfolio of gold, copper, and lead/zinc targets located both in the Dominican Republic and in Spain as well as to seek suitable other targets in the areas where the Company is already operating.

Mr. Robertson has over sixteen years of accounting, auditing, and tax experience including working with Ernst & Young from 1999 to 2005. Currently, he is the managing partner of Quantum Advisory Partners LLP, a professional services firm dedicated to assisting publicly listed companies with their financial reporting, taxation and regulatory requirements. Mr. Robertson is currently also the Chief Financial Officer of Grayd Resource Corp., Christopher James Gold Corp, and Slater Mining Corp. and a director of Russell Breweries Inc. Mr. Robertson holds a BA from the University of Western Ontario (1993) and obtained his Chartered Accountant designation from the British Colombian Institute of Chartered Accountants (1997).

Mr. Robertson has been granted 300,000 stock options in connection with his appointment as CFO. The stock options have a term of five years, vest after one year and are exercisable into common shares of the Company at an exercise price of $0.15 per common share.

Anna Stylianides, Interim President and CEO commented, "We would like to extend our sincere thanks to Mr. Cannon for his long term tenure and contributions to GoldQuest and wish Mr. Cannon all the very best in his future endeavors.

"We are very pleased to announce the appointment of Mr. Paul Robertson as CFO and to welcome the Quantum Advisory Partners Group to Goldquest's management team. The very extensive technical and operational experience in the mining industry of the Company's new Board of Directors and the expertise of the Quantum Advisory Group position the Company extremely well to continue its growth and significantly expand its assets."

Mr. Stewart D. Redwood, PhD, FIMMM, Consulting Geologist for the Company is a Qualified Person as defined by NI 43-101 and has supervised the preparation of the scientific and technical information in this news release. For a full discussion of the Company's sampling, analysis, quality assurance, quality control, and other technical disclosure, please see the Company's NI 43-101 technical report dated May 4, 2009 on SEDAR.

On behalf of the Board of Directors,

This email address is being protected from spambots. You need JavaScript enabled to view it.