VANCOUVER, BC--(Marketwired - September 04, 2014) - GoldQuest Mining Corp. (: )(: )(: ) ("GoldQuest" or the "Company") is pleased to announce an exploration update and confirmatory metallurgical data for its 100% owned Tireo and Romero projects in the Dominican Republic.

"The 2014 exploration campaign is now in full swing and we are encouraged by the presence of a copper zone at the Guama target and the development of two new drill targets on our Tireo Project," commented Julio Espaillat, GoldQuest's CEO, "We plan to return to the northern Guama area in the 2014 drilling program, testing at least 7 targets. Currently our drilling focus is on the La Bestia target".

The three holes included in this second batch of holes released from the 2014 exploration program were completed on a series of targets in the Guama area. The most northern hole, LTP-164 is located over 2.5 kilometres north of Romero, and considered indicative of a newly identified mineralizing event. The hole intersected a copper interval of 0.29% copper over 10.7 meters from 47.2m below surface and a second zone of 1.5 meters of 1.23% copper starting at 97.5 meters below surface, Additional drilling is planned at stronger chargeable targets to the north of LTP-164 during the 2014 campaign. The other two holes did not return significant mineralization.

In addition to the active drill campaign at La Bestia, the Company continues to develop new drilling targets through its ground program throughout the Tireo Project. Mapping combined with ground IP (induced polarization) using Insight Geophysics has identified two new targets in recent weeks. New targets include an area 500 meters west of the La Bestia target and another to the south of the Romero South deposit.

The target west of the main La Bestia zone is made up of a broad chargeability high of over 1.5 kilometers wide and over 2 kilometers in length and remains open to the north-west and south. The new target south of Romero South was identified in the past few days and the survey crew is currently defining the extents this target. Both new targets were identified by systematically surveying and mapping favorable ground identified in the airborne ZTEM survey flown in early 2014.

The updated map, including the latest drilling locations, geophysics, and targets at the Guama and La Bestia targets can be found here: http://www.goldquestcorp.com/images/maps/GQC_IPMap-Targets-Sept42014.pdf 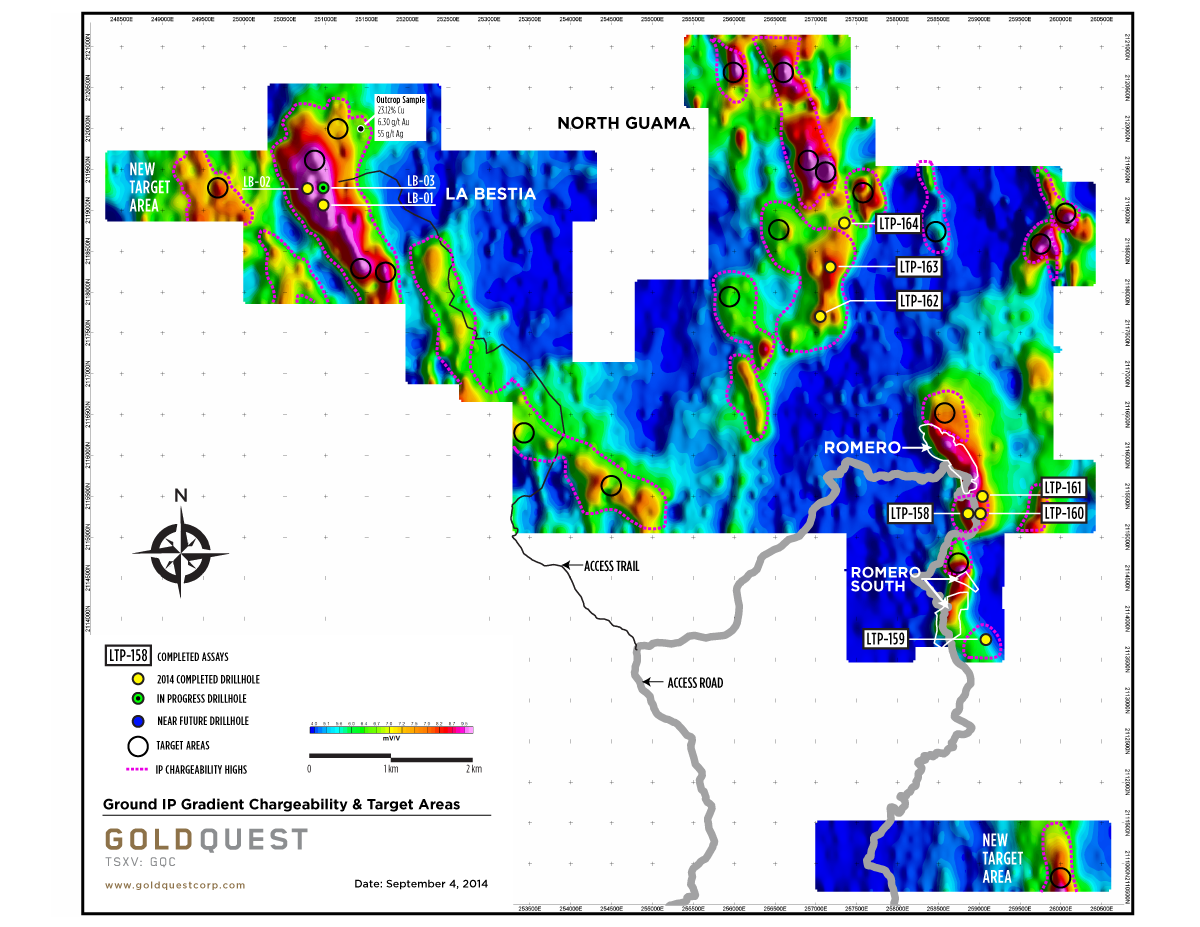 The copper mineralization reported in the table above may not represent true mineralization widths and additional drilling will be required to determine the extents, orientation and whether potentially economic concentrations occur at the target. Copper values are not capped at an upper value for the calculation of the average grade for the interval. Holes LTP-162 and LTP-163 are vertically drilled holes, and LTP-164 is inclined with a dip of -70 degrees and an azimuth of 190 degrees.

The Company has completed two additional holes and has a third hole in progress at the La Bestia target. The Company will continue to release new drill hole results in batches as their analysis is completed. ACME Labs have been instructed to release assays to the Company only once the batches have been completed.

Metallurgical update
In the Preliminary Economic Assessment (PEA) for the Romero Project, filed July 16th 2014 on SEDAR, Micon International, independent engineers, reported on a potential flow sheet, where 92% of the copper reported to the copper concentrate along with 51% of the gold. A second concentrate, mainly consisting of the mineral pyrite, was produced, containing 32% of the gold, which was deemed suitable for bioleaching to recover the gold. At the time of the PEA report the bioleach work was in progress, by ALS's laboratory in Perth Australia. For the purposes of the PEA report, Micon estimated that the recoveries of gold from the pyrite concentrate were estimated at 93%. The laboratory has confirmed this 93% recovery with recommendations that may lead to further improvements. At this preliminary stage, total recoveries of metals into both concentrates are estimated to be a combined 81% for the gold and 92% for the copper.

As part of the Company's Quality Assurance and Quality Control procedures (QA/QC), most of the high grade intervals are re-assayed and the Company is awaiting these check samples. In addition, systematic re-assaying of intervals is in progress to confirm compliance of blanks and duplicates checks. The Company also reviews results from Certified Standard Reference materials (CRSM or Standards), which are inserted at a rate of 5 per 100 samples. Within the results disclosed herein, there were no samples which had results outside of the recommended tolerances for copper or gold. In GoldQuest's drill programs, composite intervals were chosen using a combination of geological criteria and mineralization, averaging around 2 metres core length. The drill core is cut in half with one half of the core sample shipped to ACME Labs by GoldQuest technicians. The remaining half of the core is kept at the company core shack for future assay verification, or any other further investigation. Assays within intervals below the 0.005 g/t detection limit for Au and a 0.001% detection limit for Cu were given a zero value. All drill samples were prepared and screened by ACME Labs (Santo Domingo); metallic fire assay and multi-element ICP-MS were assayed by ACME Analytical Laboratories (Chile). Gold values are determined by standard fire assay with an AA finish, or, if over 10.0 g/t Au, were re-assayed and completed with a gravimetric finish. Copper values are determined using a hot 4-acid digest followed by an ICP-MS analysis. QA/QC included the insertion and continual monitoring of numerous standards, blanks and duplicates into the sample stream, at random intervals within each batch. The comprehensive GoldQuest Quality Assurance and Quality Control protocols can be viewed on GoldQuest's website at: http://www.goldquestcorp.com/index.php/corporate/corporate-governance.

About GoldQuest
GoldQuest is a Canadian-based mineral exploration company with projects in the Dominican Republic traded on the TSX-V under the symbol GQC.V and in Frankfurt/Berlin with symbol M1W, with 145,755,044 shares outstanding (147,041,207 on a fully diluted basis), as at August 26, 2014.

GoldQuest Mining Corp.
Bill Fisher
Chairman -- Toronto
+1-647-271-4505
This email address is being protected from spambots. You need JavaScript enabled to view it.
www.goldquestcorp.com