VANCOUVER, BC--(Marketwired - July 31, 2014) - GoldQuest Mining Corp. (TSX VENTURE: GQC)(FRANKFURT: M1W)(BERLIN: M1W) ("GoldQuest" or the "Company") is pleased to announce an exploration update including assay results from four holes from its ongoing drill program which commenced May 2014 on its 100% owned San Juan concession group in the Dominican Republic, which includes the Romero gold/copper deposit (see press release dated October 29, 2013). Drilling is underway at a porphyry target at La Guama North, and the larger La Bestia target will be drilled shortly. The updated map can be found here: http://www.goldquestcorp.com/images/maps/GQC_IPMap-Targets-July312014a.pdf 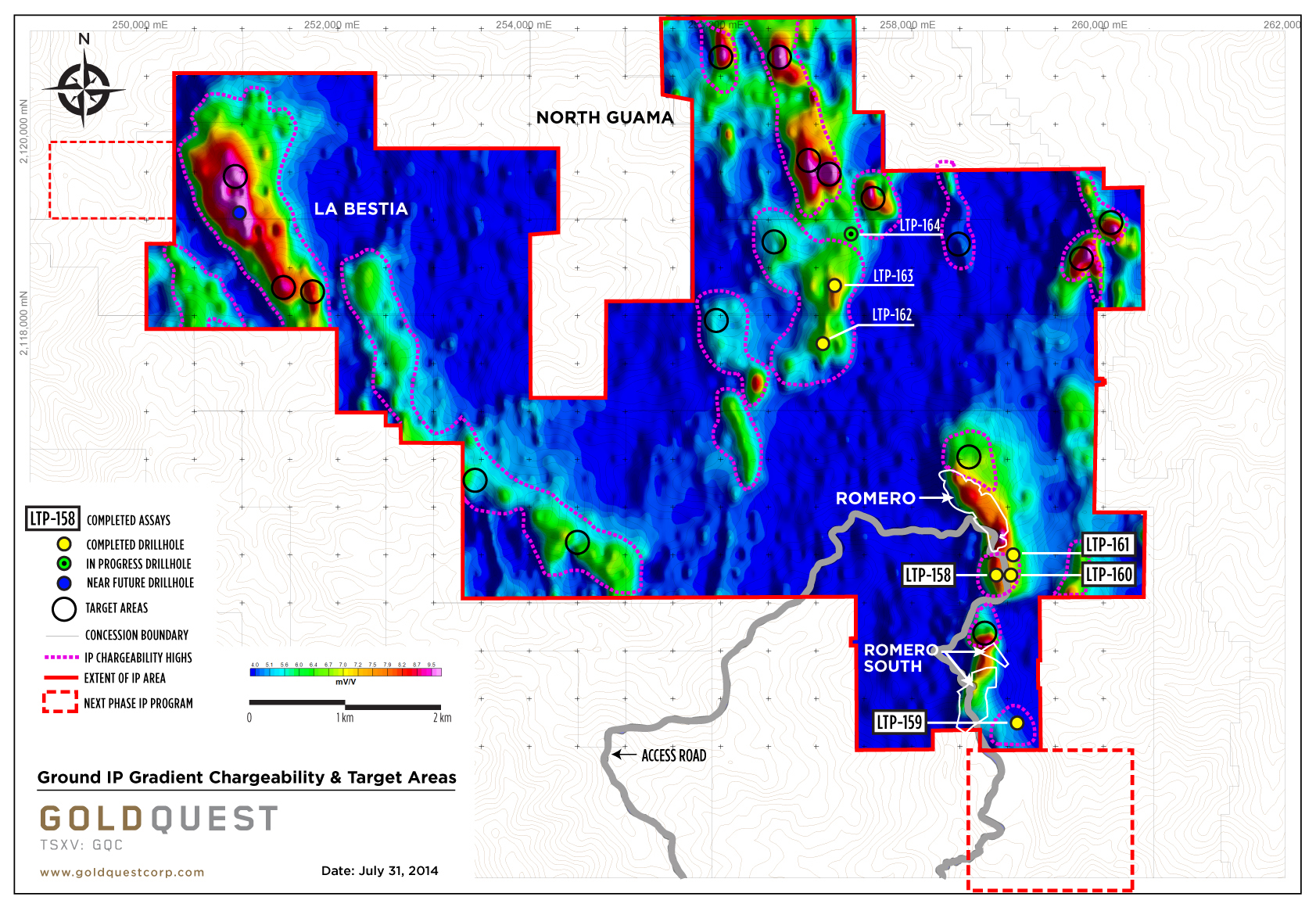 Assays have been received for four holes, LTP 158,159,160 and LTP-161. A further two holes, LTP 162 and 163 have been completed with assays pending and LTP 164 is in progress. LTP 158, LTP 160 and LTP-161 were drilled between the Romero and Romero South deposit, and all three holes terminated above or adjacent to the target zone and LTP 159 was drilled to the east of Romero South All holes were within the alteration halo consistent with Romero style hydrothermal systems. No significant intersections have been encountered to date and more ground geophysics is required on the root zone which extends to the south and outside of the current ground IP coverage.

"The drilling reported today was seeking to link the Romero and Romero South mineralizations," commented Julio Espaillat, GoldQuest's CEO, "The results indicate that any gold and/or copper mineralization is likely to be encountered at deeper or adjacent locations as the alteration seen in the drill core is consistent with being a lower temperature and pressure than the conditions required to deposit gold and copper in a Romero type system. The drill program is now focusing on shallower targets to the north and west of Romero."

The results and sub intervals summarized in the table above have a bottom cut-off of 0.15 g/t of gold. A top cut of 50 g/t gold is used, however no samples in this release exceeded 50 g/t. The intervals may not represent true mineralization widths and the exact orientation of the mineralization at this stage of the drilling is not yet known, although the host volcanic lithologies are sub-horizontal in orientation.

LTP-158 - Intersected pervasive pyrite mineralization with patchy weak gold, copper and zinc. Detailed thin sections revealed the hole intersected the upper part of hydrothermal system and that stronger potential remains below. The hole was stopped short of the target depth due to a combination of drill capacity and a large fault zone. Additional deeper drilling will be considered at a later date once stronger near surface targets have been drilled.

LTP-159 - Targeted a previously unidentified deep root zone to the Romero South mineralization. The drilling encountered alteration and pyrite mineralization associated with weak gold, copper and zinc. Drilling confirmed the anticipated alteration system at a depth of 500 metres and to the east of the deposit, as identified in the airborne ZTEM survey, encountering two weakly mineralized zones where both the upper and deeper zone matched the targets. The ZTEM conductive anomaly continues for several kilometres to the south and additional drilling will be considered once the area has been covered with ground IP geophysics.

LTP-160 - Intersected similar results as LTP-158 and also appears to be in the upper part of the targeted hydrothermal system. The hole did not reach the targeted depth due to a combination of drill capacity and a large fault zone. Additional deeper drilling will be considered at a later date once stronger near surface targets have been drilled.

LTP-161 - Did not intersect significant mineralization and the hole is above and too far east of the desired core of the hydrothermal system.

Exploration Update
The complete San Juan property has been flown with airborne magnetics and electro magnetics (EM) by Geotech Geophysics in February and March 2014, the first ever comprehensive airborne survey done in the district. Favorable exploration areas identified from the airborne magnetics and EM are focused on with our comprehensive ground program. The ground program involves detailed mapping and deep penetrating ground IP by Insight Geophysics. In recent weeks we have identified a new chargeable anomaly 7 kilometers north-west of the Romero Targets and to the north of the current drilling at North Guama, which the Company expects will be drilled in due course.

This new anomaly, named La Bestia, has similar geophysical characteristics to Romero, and surface mapping and sampling have been encouraging. Argillic alteration with zones of intense silicification has been traced extensively at surface and is coincident with the anomaly. Regional reconnaissance in 2013, following the Romero discovery, identified mineralized quartz veins at the north-east limit of the anomaly.

The individual assay intervals from holes LTP-01 through LTP-161 can be reviewed on GoldQuest's website at the following link: http://www.goldquestcorp.com/images/spreadsheets/GoldQuest_AssaysJuly312014.xls
The collar locations and hole azimuth and dips can be reviewed at: http://www.goldquestcorp.com/images/spreadsheets/GoldQuest_HoleLocationsJuly312014.xls

Geological Model
The geological interpretation of the mineralization found at the Romero Project is an intermediate epithermal sulphidation system, which preferentially occurs in the flat lying dacite unit. Generally the lower contact of the dacite unit is more strongly mineralized and the highest gold and copper values occur towards the centre of the mineralized body, with a gold+zinc zone followed by a pyrite halo marking the outer periphery.

Dr. Richard H. Sillitoe, one of the world's leading experts in epithermal and porphyry deposits, recently visited the Company's Las Tres Palmas project and noted, "Much of the previously defined mineralization in the Hondo Valle and Escandalosa sectors, south along the mineralized trend from Romero, displays this distal gold-zinc association, suggesting that additional, proximal, copper-rich centres may exist."

The Company continues to expand the coverage of ground IP geophysics which has been successful at identifying sulphide mineralization and which led to the discovery of Romero. To date ground IP geophysics have been completed over an area of 4,300 hectares, representing less than 25% of the concession areas held or under application by GoldQuest.

The Company will continue to release new drill hole results in batches as their analysis is completed. ACME Labs have been instructed to release assays to the Company only once the batches have been completed.

As part of the Company's Quality Assurance and Quality Control procedures (QA/QC), most of the high grade intervals are re-assayed and the Company is awaiting these check samples. In addition, systematic re-assaying of intervals is in progress, to confirm compliance of blanks and duplicates checks. The Company also reviews results from Certified Standard Reference materials (CRSM or Standards), which are inserted at a rate of 5 per 100 samples. Within the results disclosed herein there were 2 samples which had results below, and 1 sample above the recommended tolerances for copper. The samples were outside of significant mineralized intervals and the batches will not be re-assayed. In GoldQuest's drill programs, composite intervals were chosen using a combination of geological criteria and mineralization, averaging around 2 metres core length. The drill core is cut in half with one half of the core sample shipped to ACME Labs by GoldQuest technicians. The remaining half of the core is kept at the company core shack for future assay verification, or any other further investigation. Assays within intervals below the 0.005 g/t detection limit for Au were given a zero value. All drill samples were prepared and screened by ACME Labs (Santo Domingo); metallic fire assay and multi-element ICP-MS were assayed by ACME Analytical Laboratories (Chile). Gold values are determined by standard fire assay with an AA finish, or, if over 10.0 g/t Au, were re-assayed and completed with a gravimetric finish. QA/QC included the insertion and continual monitoring of numerous standards, blanks and duplicates into the sample stream, at random intervals within each batch. The comprehensive GoldQuest Quality Assurance and Quality Control protocols can be viewed on GoldQuest's website at: http://www.goldquestcorp.com/index.php/corporate/corporate-governance.

About GoldQuest
GoldQuest is a Canadian-based mineral exploration company with projects in the Dominican Republic traded on the TSX-V under the symbol GQC.V and in Frankfurt/Berlin with symbol M1W, with 145,755,044 shares outstanding (159,331,209 on a fully diluted basis), as at July 31, 2014.

GoldQuest Mining Corp.
Bill Fisher Chairman - Toronto
+1-647-271-4505
This email address is being protected from spambots. You need JavaScript enabled to view it.
www.goldquestcorp.com